Shopify is one of the most popular e-commerce platforms in the world, but how big is it? How many people use it? 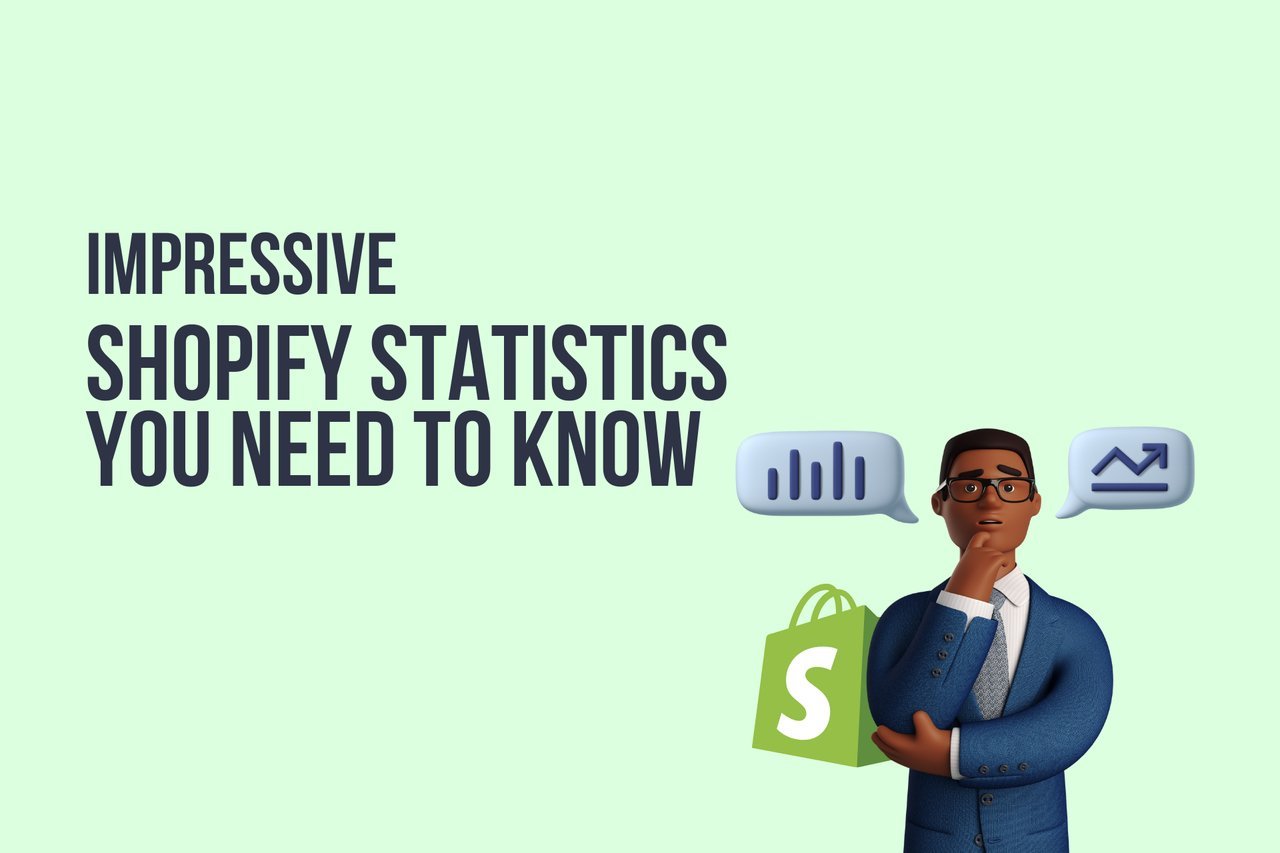 You might have heard the story behind Shopify; how it started when two men attempted to sell snowboards online, then dissatisfied with the existing platforms, they created a new one. The platform they created turned into one of the leading e-commerce platforms, hosting all kinds of companies.

That’s really inspiring, isn’t it? Wait until you see the stats. I compiled the most recent and mind-blowing Shopify statistics in this post. This includes the numbers on:

Over 7,000 employees work for Shopify.

Shopify was founded in 2006 by three Canadian, inspired by their poor online e-commerce experience to sell snowboard equipment.

Shopify is one of the leading e-commerce platforms, with almost 20% market share.

There are over 100 free and paid Shopify themes available.

Shopify opened its first brick-and-mortar storefront in Los Angeles in 2018.

Shopify offers a large affiliate program, where affiliates can earn an average of $58 for each user they bring as signup members for a paid plan.

How huge is global e-commerce, and what are the leading trends?

Shopify has recently published some global e-commerce statistics to help marketers and business owners see where the global market and trends are headed: 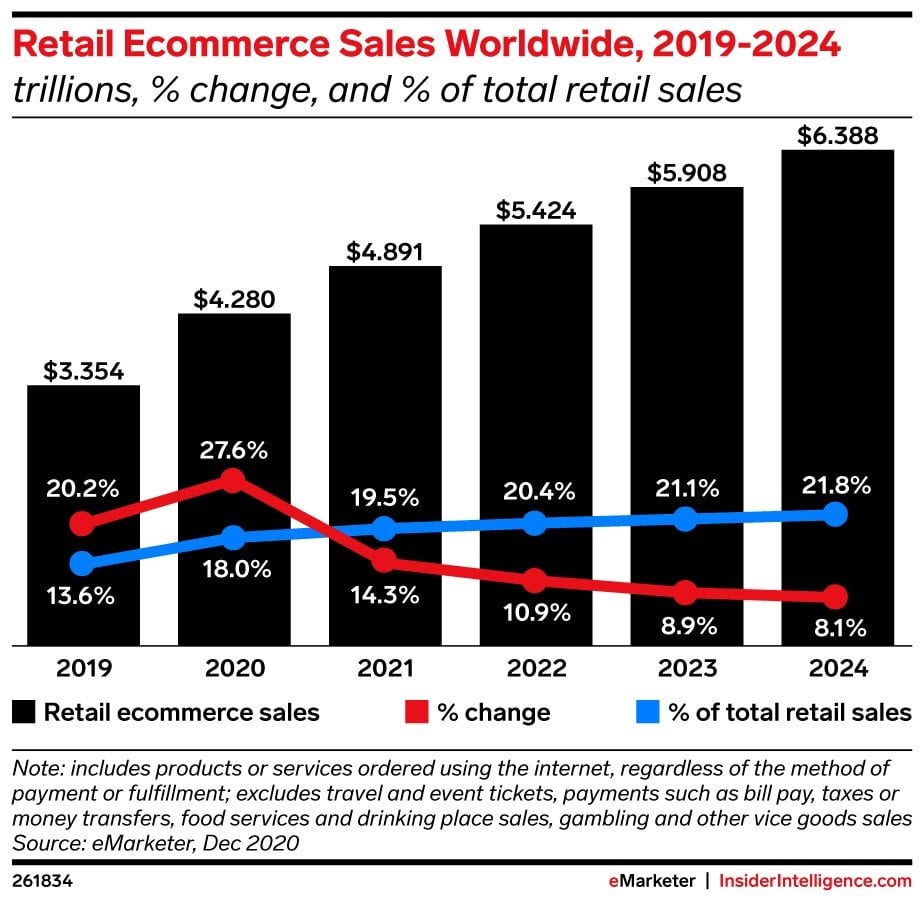 China has the largest portion of global e-commerce size and sales, outranking the United States. (Oberlo)

Shopify Statistics: How big is Shopify?

So, you know that Shopify is huge, but how many Shopify stores are there in 2021?

Here’s a breakdown of the number of live Shopify stores by country:

Shopify is the third-largest online retailer in the United States, following Amazon and eBay. (Source: Shopify)

Workie, Roxxe, and Porto are three of the most popular Shopify themes. (Source: Ecommerce Platforms)

More than 80% of Shopify retailers use third-party apps, and 25.8 million apps have been installed. (Source: Shopify)

Online shoppers are twice as likely to purchase a product with a 3D model over a flat image. (Source: SpeedBoostr)

Shopify’s total platform sales around the world are estimated at $200 billion to date. 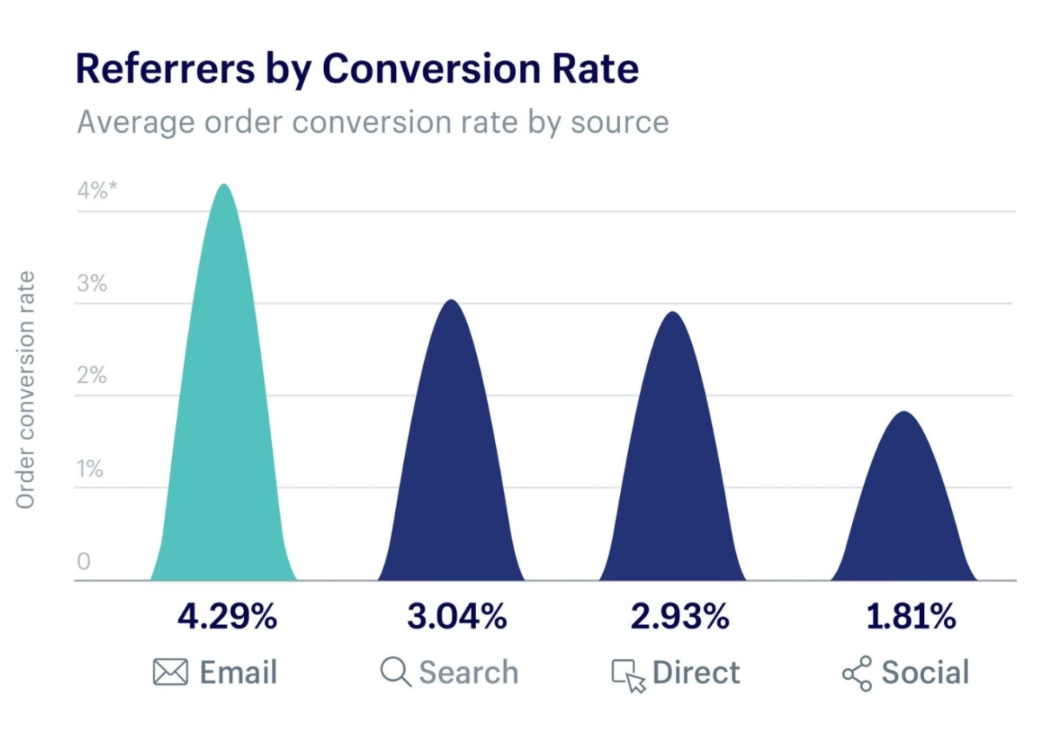 Mobile traffic makes up 79% of the total traffic and 69% of orders of all traffic.

The average visitor spends over 3 minutes on Shopify and goes through more than 3 stores.

The top-grossing companies on Shopify have annual revenues of $7 to $11 billion. (Statista, Shopify)

Shopify generated more than $900 million in subscription solutions and around $2 billion in merchant solutions in the fiscal year 2020. (Statista) 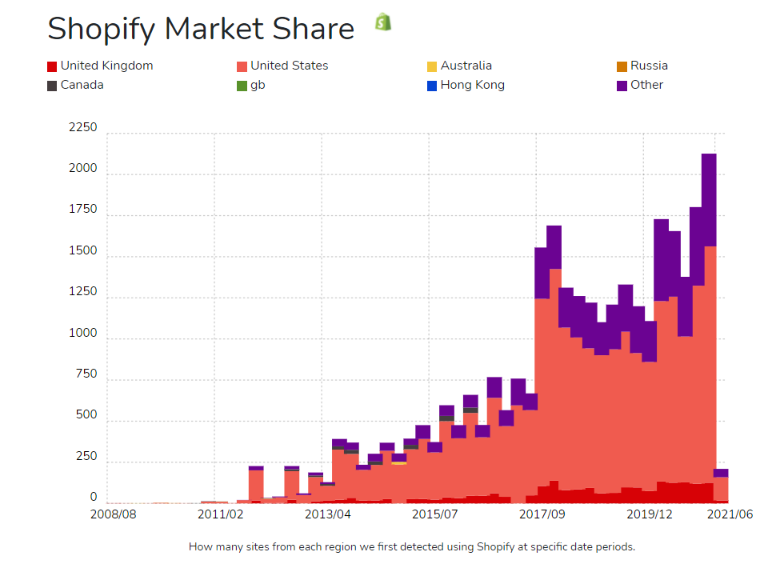 Shopify’s MRR (Monthly Recurring Revenue) increases by 48% in the 2019 year over year. (Source: The Motley Fool) 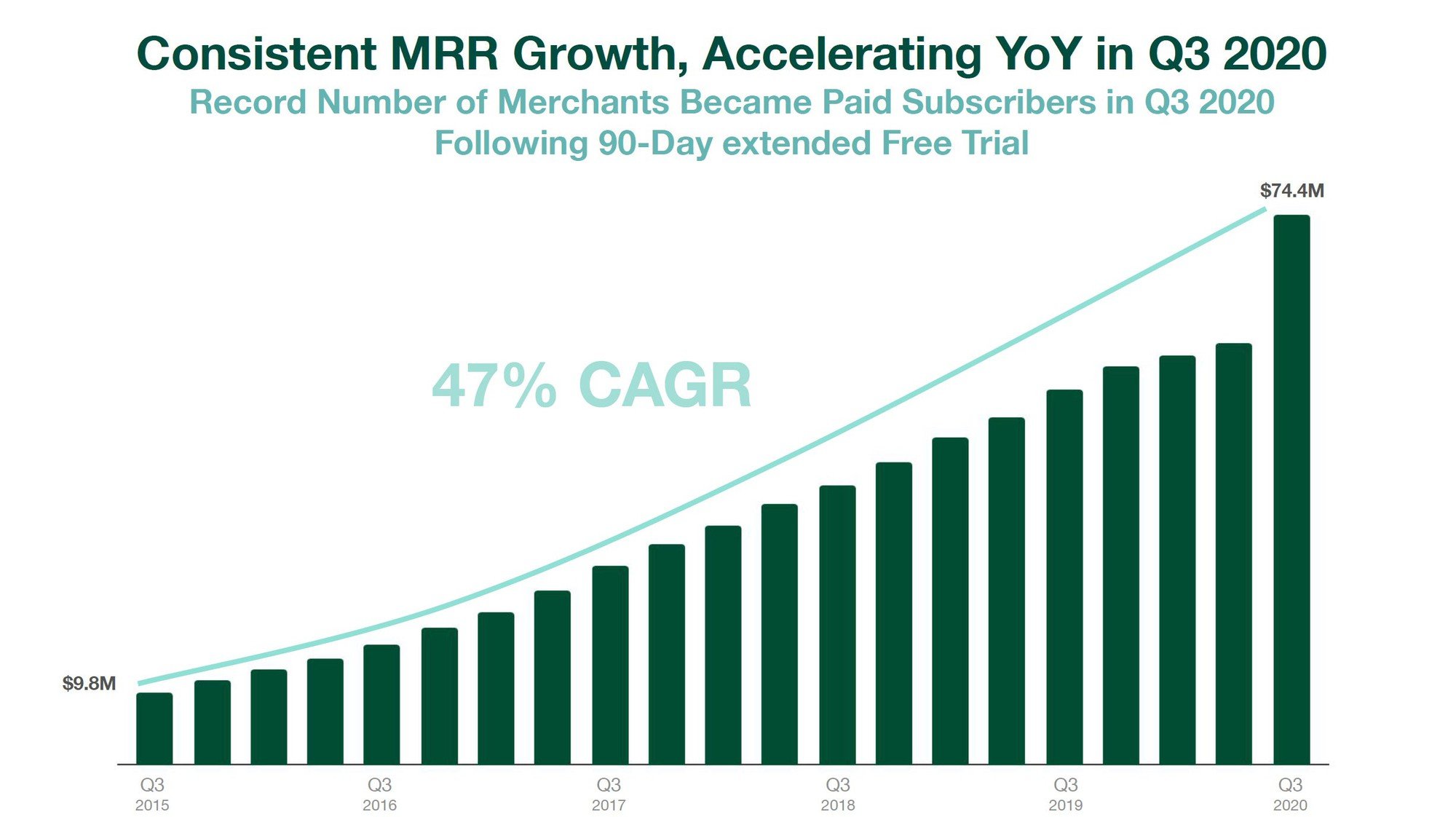 There are 6,000 Shopify apps available on Shopify App Store with 12 different categories.

Shopify powers over 841,000 stores in the United States. 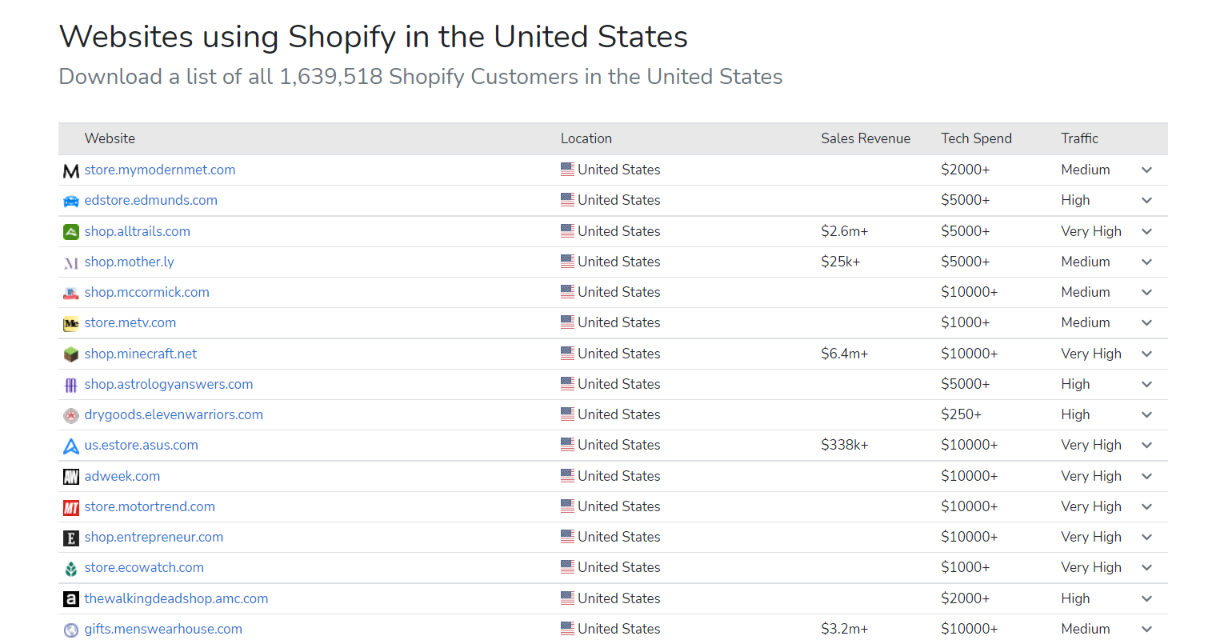 How many Shopify stores are there in 2021?

That being said: It’s important to note that the current number of active Shopify stores is constantly changing. 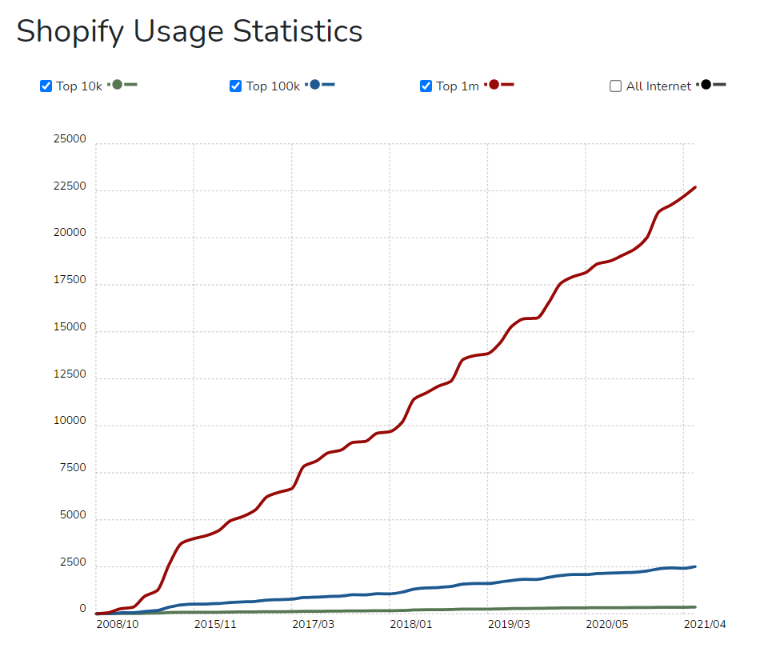 How many Shopify users are there?

There are over 2,297 Million live websites using Shopify. (Builtwith)

The majority of the domains (71.27%) are currently registered in the United States with over 1,63 Million domains. The United Kingdom and Australia follow the US completing the top three.

How many Shopify stores are successful?

Shopify’s success rate is pretty high with only between 2%-5% of stores abandoned quickly for varying reasons. However, Shopify doesn’t provide any detailed data about that. Still, we can look at the Gross Merchandise Volume, which is sales volume across all merchant stores. 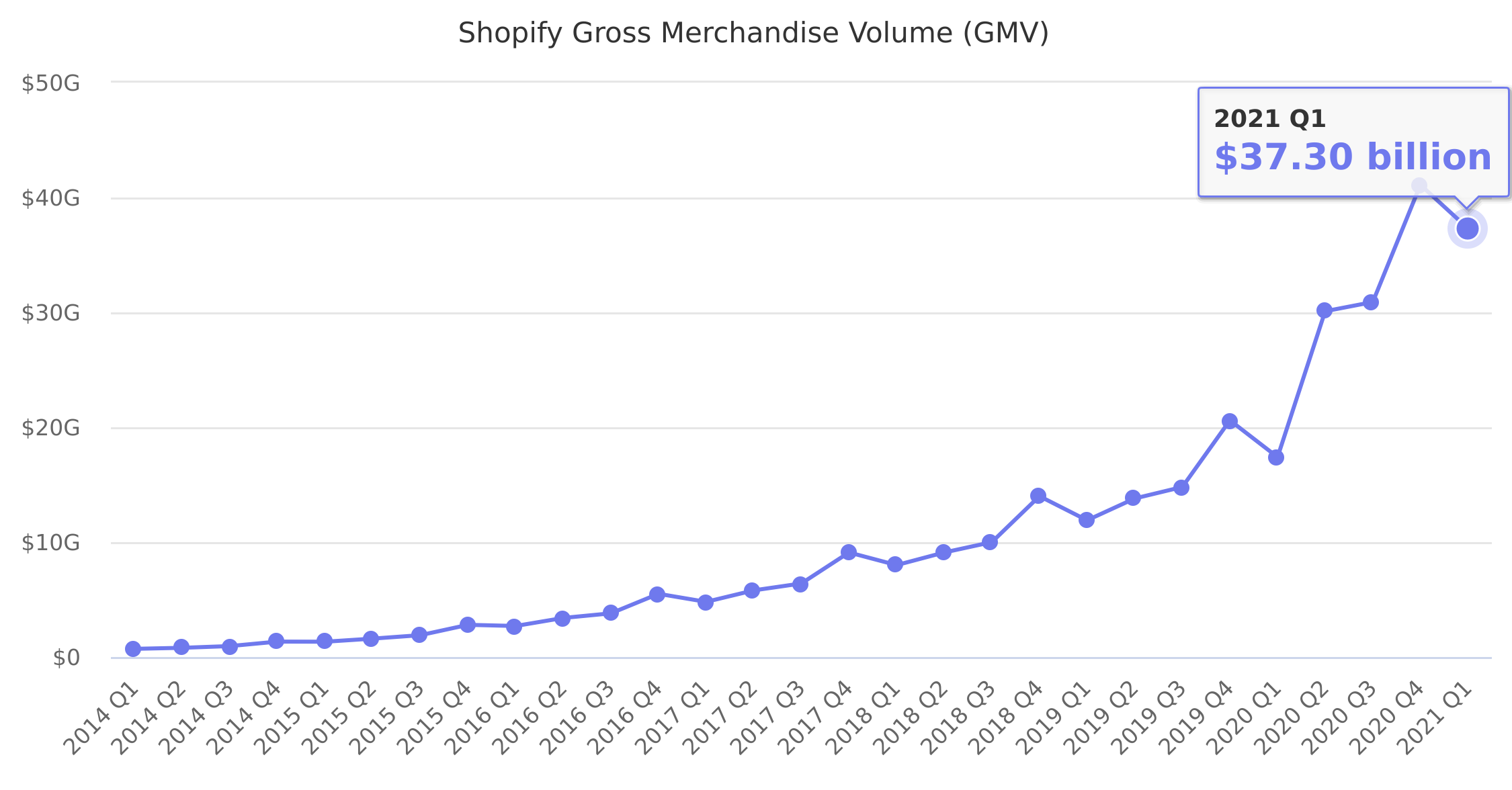 How much money can be made on Shopify?

Depending on the type of product and the amount of traffic you get on your Shopify website, you can make anywhere from $1,000 to $100,000 a month.

Mind that there are many variables that can affect the revenue you generate such as business types, amount of traffic, marketing, and so on.

How to Make Money on Shopify: 10 Proven Ways

What companies use Shopify?

Here are some of the biggest companies that use Shopify:

How many people work at Shopify?

There are over 7,000 employees working for Shopify while over 700,000 are employed directly and indirectly in the partner community. (Source: Shopify and You Blog)

That’s all for my list of Shopify stats in 2021. The global e-commerce platform is growing rapidly and although not the biggest in terms of market share, Shopify’s gone through a record growth over the past years.

Additionally, since many reputable brands power their websites with Shopify, it can be at the top of the list when choosing who to partner with or build an online store with.

Selected blog posts for you: