Shopify is one of the most popular e-commerce platforms in the world, but who is behind all this creativity?

We are here to tell the story of the genius mind who made an eCommerce platform that sold $4.6 billion in 2021 alone. 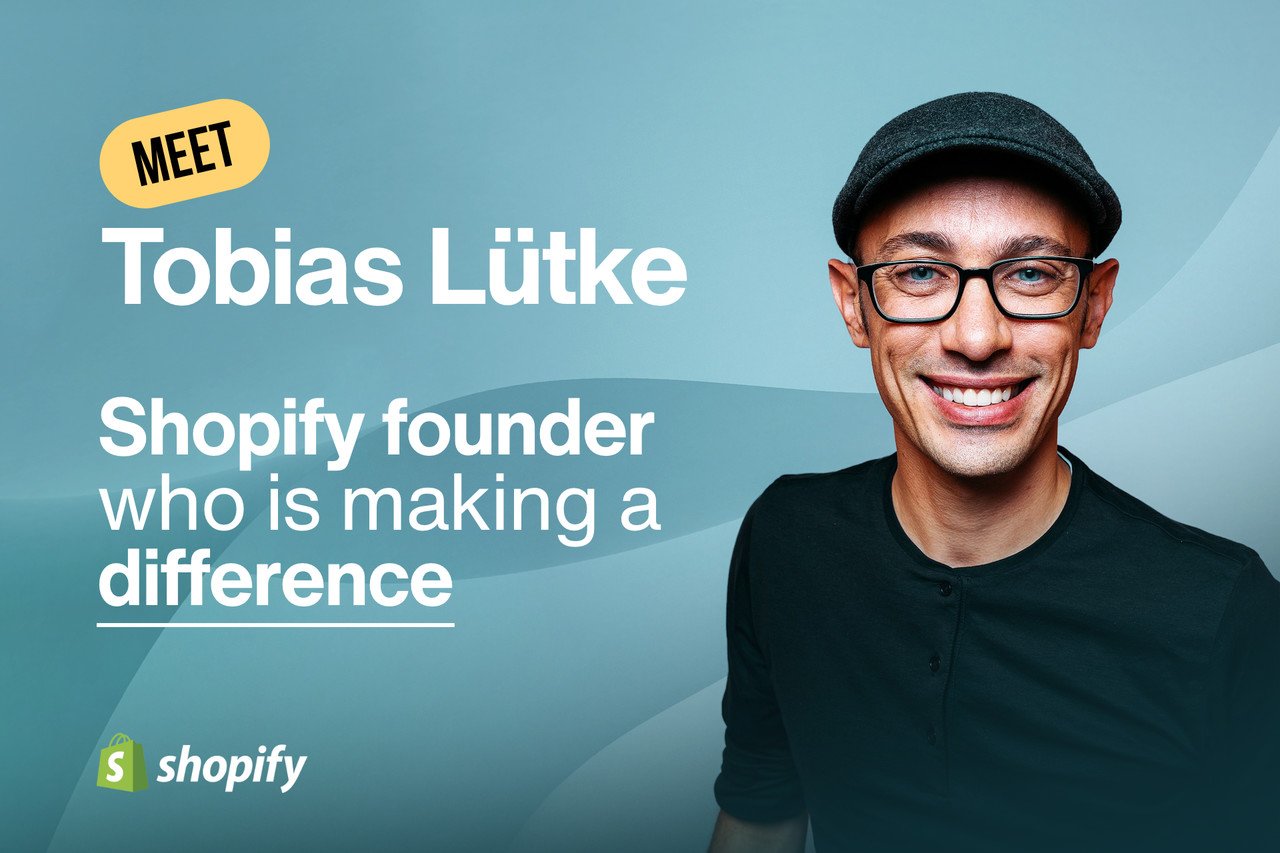 Shopify founder Tobias Lütke started as a programmer who wanted to make a difference; He wanted an easier way for everyone to set up and manage their online stores.

In 2004, he got the idea; Tobias was living in Ottawa with his girlfriend when he decided to launch an online snowboard shop called Snowdevil.

He wanted a better e-commerce solution than the existing costly and tiresome software, triggering him to begin his remarkable journey towards writing his software.

“You really want a company that's full of people from all these different backgrounds and then allow them to be creative as possible, come together, and come up with great ideas.” __Tobias Lutke

Having launched Snowdevil, as word of Lutke's innovation spread, more online merchants approached him about licensing his software to run their sites.

A few years later, Lütke and his co-founder realized that the software they had built could be applied to much more than just snowboards, and just like that, the amazing e-commerce platform Shopify was created.

Since then, Shopify has grown into a publicly-traded company with over 4,000 employees and more than $1 billion in revenue.

Now here in this article, we are going to tell you more about Tobi and his journey of becoming a tech tycoon who draws billions in salary and runs Canada's largest listed company.

Are you ready? So let's jump right in.

Who is Tobias Lutke?

Tobias “Tobi” Lütke is not like any other typical CEO you’ve met.

He’s the master mind who co-founded Shopify, a Canadian start-up, and grew it into a global e-commerce giant that helps companies set up and run online stores across over 175 countries. 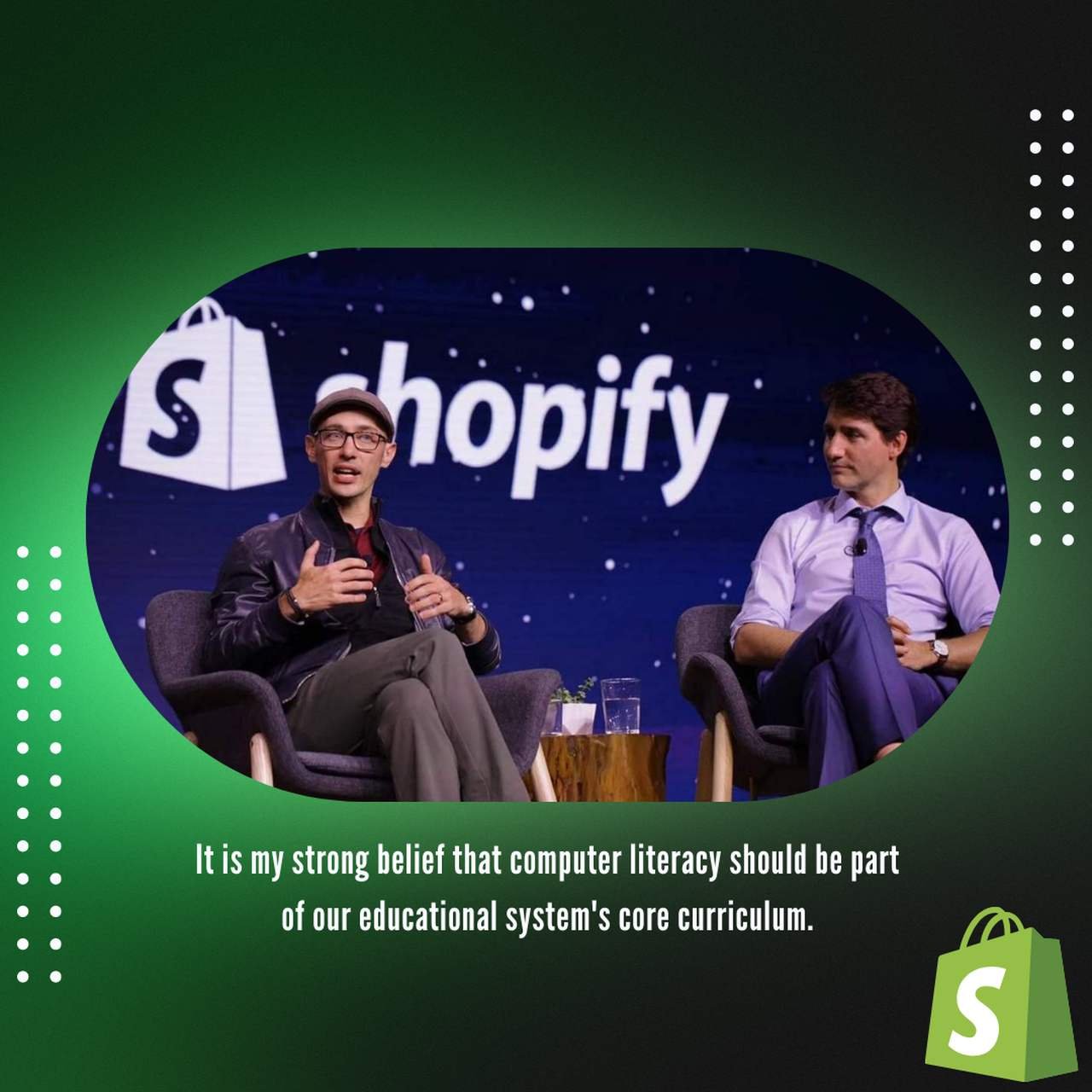 Tobias Lutke was born in 1981 and grew up in Germany, where at the age of 11 or 12 he took his first steps toward becoming a programmer.

Tobi was only six years old when his parents gifted him with his first computer, a Schneider CPC, which later ignited his passion for programming.

The following is what Tobi said about his experience: “I got my first computer when I was 6, and I was part of that early generation of children who grew up with computers always being around. I fell in love with them early on.”

12 years old Tobi began coding without even quit realizing it! As a hobby, he began modifying the computer hardware and rewriting the code of the games he played in his free time.

Lutke Drooped out of School when he was 16

You might be surprised (or not 😉) to learn that like several other billionaires, the Shopify CEO also never went to any university.

Lutk is one of those guys who dropped out of school when he was 16 just to enter a computer programming apprenticeship.

“By the time I was 12, I wanted to know the secrets behind the wizardry, and that started my journey toward computer programming. This was the early 1990s, when computers weren't built for the mass market.”

His passion to learn about programming and coding was limitless, leading him to complete an apprenticeship program at the Koblenzer Carl-Benz-School just after he completed his tenth grade.

Later, Tobias was involved in many open source projects, including Ruby on Rails, a server-side web application framework with default structures for databases, web services, and webpages.

Tobias moved from Germany to Canada in 2002 and served as a core team member starting in 2004.

He also released a series of open source projects such as Liquid, DelayedJob, and ActiveMerchant, which are used worldwide.

Tobias Moved to Canada in 2002

The young Tobias met Fiona on a snowboarding trip to British Columbia and fell in love. 🏂 💚

In the later stages of their relationship, Tobias decided to move to Ottawa in 2002 and live with Fiona.

And that marked the beginning of a great journey entailing success for both of them.

Shopify Was Created to Pursue a Hobby 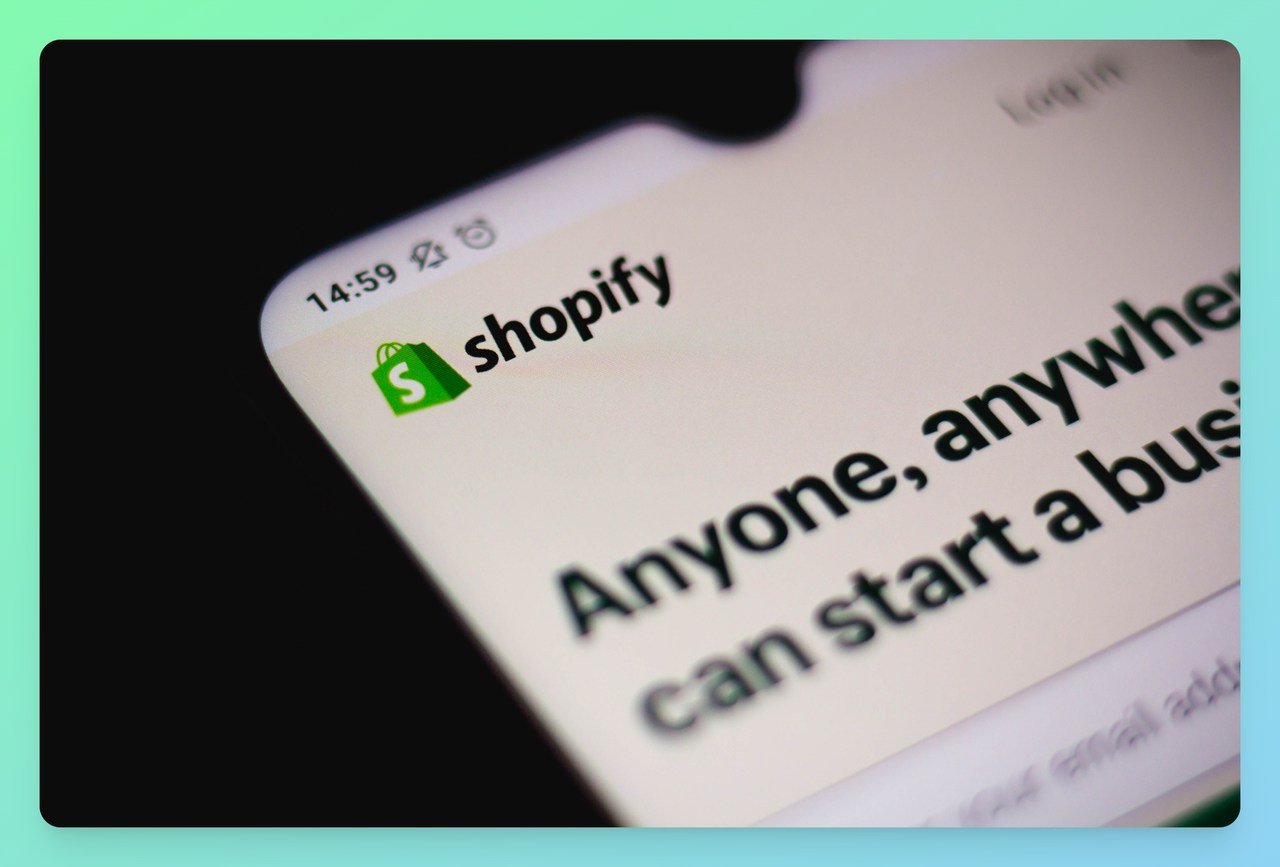 Shopify may be Canada's largest publicly listed company today, but in 2004, it was a snowboard e-tailer called Snowdevil.

Let’s see how Tobias, this 41 years old entrepreneur whose net worth is now estimated to be over US$3.9 billion, created Shopify.

In his interview with Signal v. Noise, Lütke said he wanted to open a retail store in Ottawa due to programming burnout.

However, when Lütke and his partners had trouble finding suitable software for Snowdevil, they switched to developing an e-commerce software that would help merchants sell products online.

Tobias, an avid snowboarder, decided to start an online snowboard shop, but was disappointed by the clunky and costly e-commerce software at the time.

So, just like that he thought, why not write his own eCommerce platform?

Tobi's online snowboard business, called Snowdevil, was so impressive that other online merchants wanted to license his software to run their own stores.

In 2006, Lutke and his partner realized that the software had more potential than snowboards, so that’s how Shopify, a great Canadian e-commerce platform was born.

The company has since grown into a publicly-traded company with over 4,000 employees and $1 billion in revenue.

Lutke is Known as “Anti-Bezos” 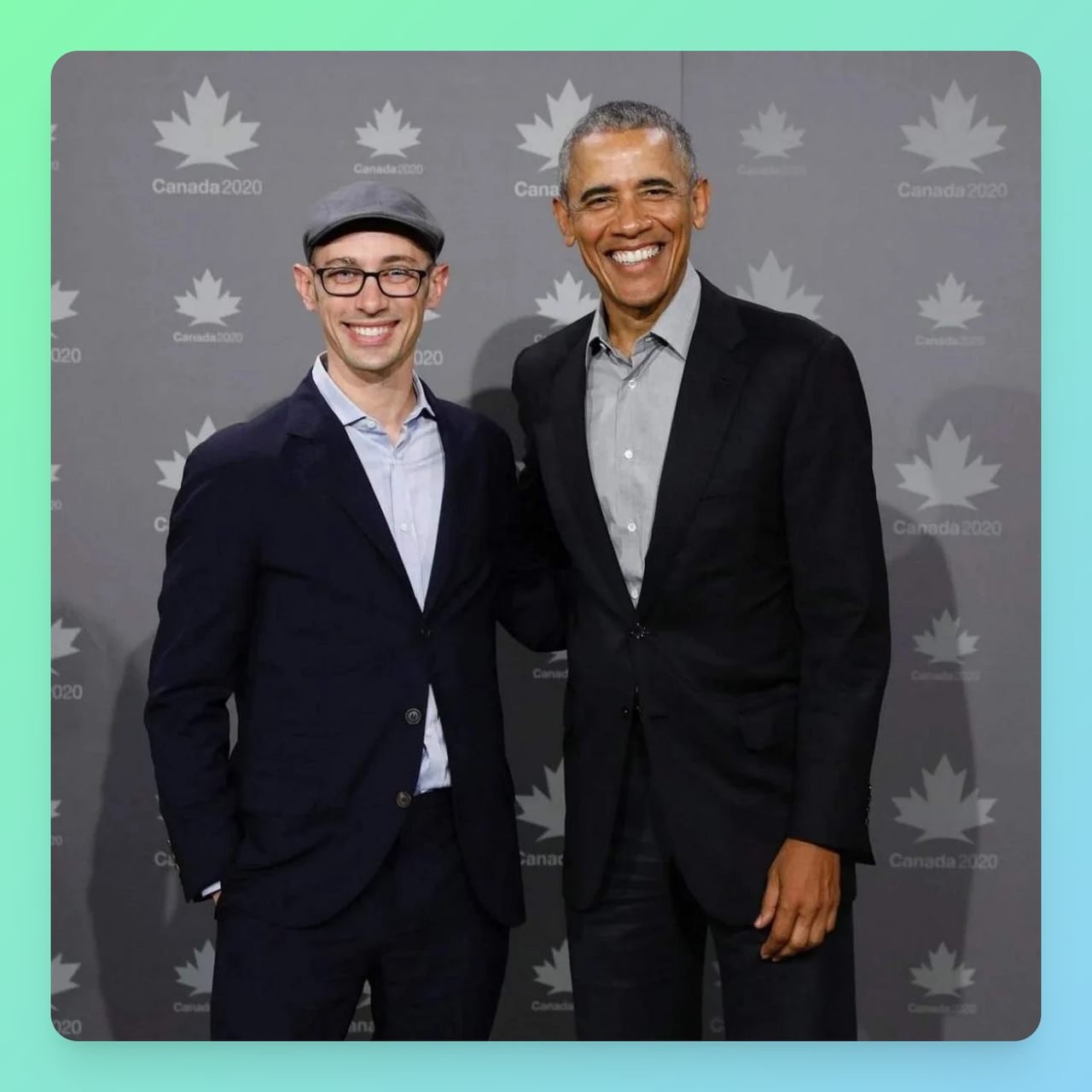 Lutke always had his own ways that set him apart from other billionaires. Thus in 2014 The Globe and Mail newspaper named him the CEO of the year, while being described as "anti-Beezos" due to his ways in which he differed from other tech billionaires.

“Amazon is trying to build an empire. Shopify is trying to arm the rebels.” _Tobias Lutke Shopify Co-Founder and CEO

When Jeff Bezos was still CEO of Amazon - North America's and the world's second richest person - he even considered Shopify a competitor.

To the point that, in 2020, Jeff Bezos and Amazon execs discussed launching a rival to Shopify and in 2021, they acquired Selz, an Australian Shopify competitor. 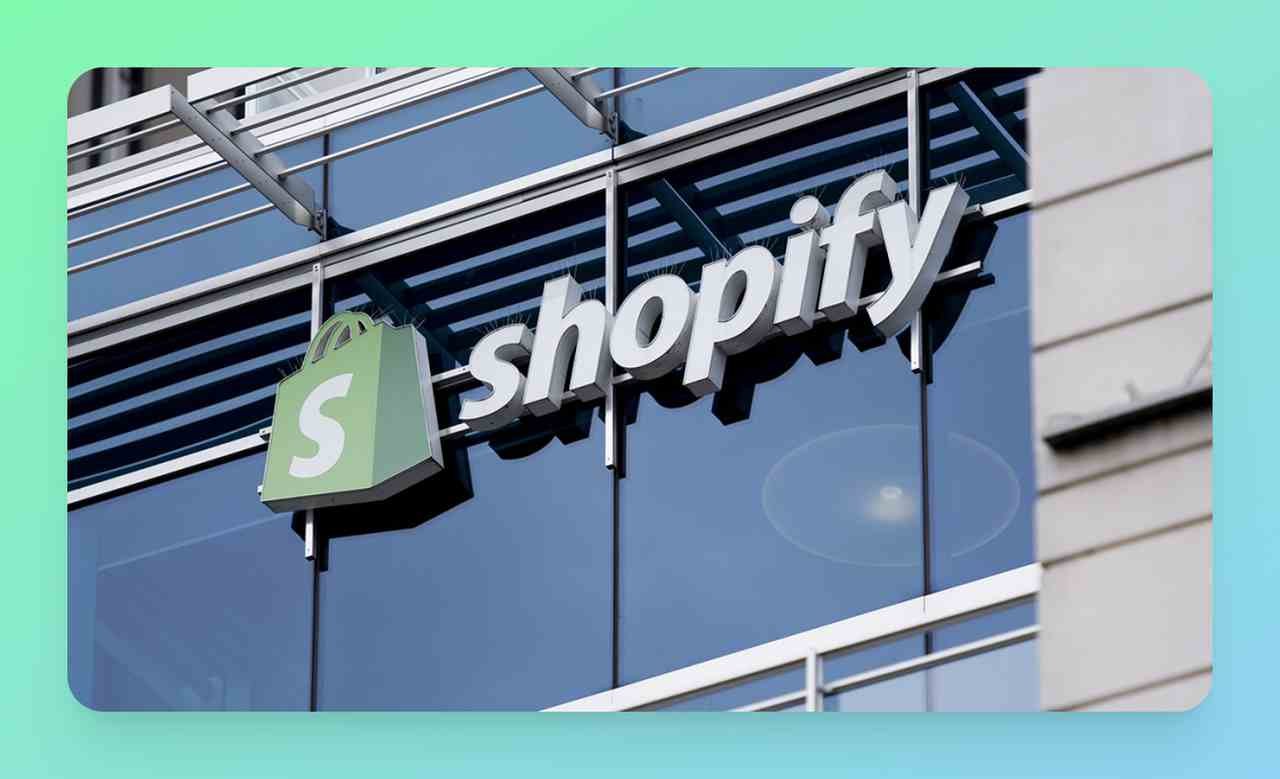 Shopify started to develop in a small office above a coffee shop in Otawwa with a dedicated group of people with a knack for solving problems.

This is how later in 2018 Lutke described the early days of his company: “Our team was still small enough to sit around a table and share a pizza while we worked late into the night. We were solving problems that had never been solved before. The energy was exhilarating.”

“In those startup days, every waking hour was ripe with problem solving, bursts of creativity, iteration, and more progress than any one of us could keep on top of alone.”

Tobias was initially Shopify's chief technology officer and has been the CEO since 2008.

This is how Angela Mondou, president and CEO of Technation, a technology industry association, described Shopify’s evolution:

“Once a unicorn, now a phenomenon and perhaps the only significant competitor to Amazon.”

In her email,she said that Lütke, is a “true national gem.” 💎

During his tenure as a senator, Colin Deacon, a former CEO of a technology company, has championed Canadian technology innovation, and says Shopify has been integral to this effort.

According to Forbes, Lütke holds 7% of Shopify which went public in 2015, and is controlling almost a third of the company's current shares.

Even though Shopify was founded and headquartered in Ottawa, the company now claims to be based in the "Internet, Everywhere" and is pretty well known in the industry.

Additionally, the company has a work-friendly culture. In May 2020, Shopify announced that it was now a digital-by-default company and most employees will work remotely on a permanent basis.

Furthermore, by creating a friendly and supportive work environment, Shopify employees have even been encouraged to start their own side businesses using Shopify’s platform. 🚀

Tobias is a Fan of NFTs

NFTs – or rather, “non-fungible tokens” – are one of the hottest topics in the crypto universe most recently.

While seemingly complicated to most of the people, blockchain experts and enthusiasts can’t get enough of this hot new trend, and Tibias is no exception. 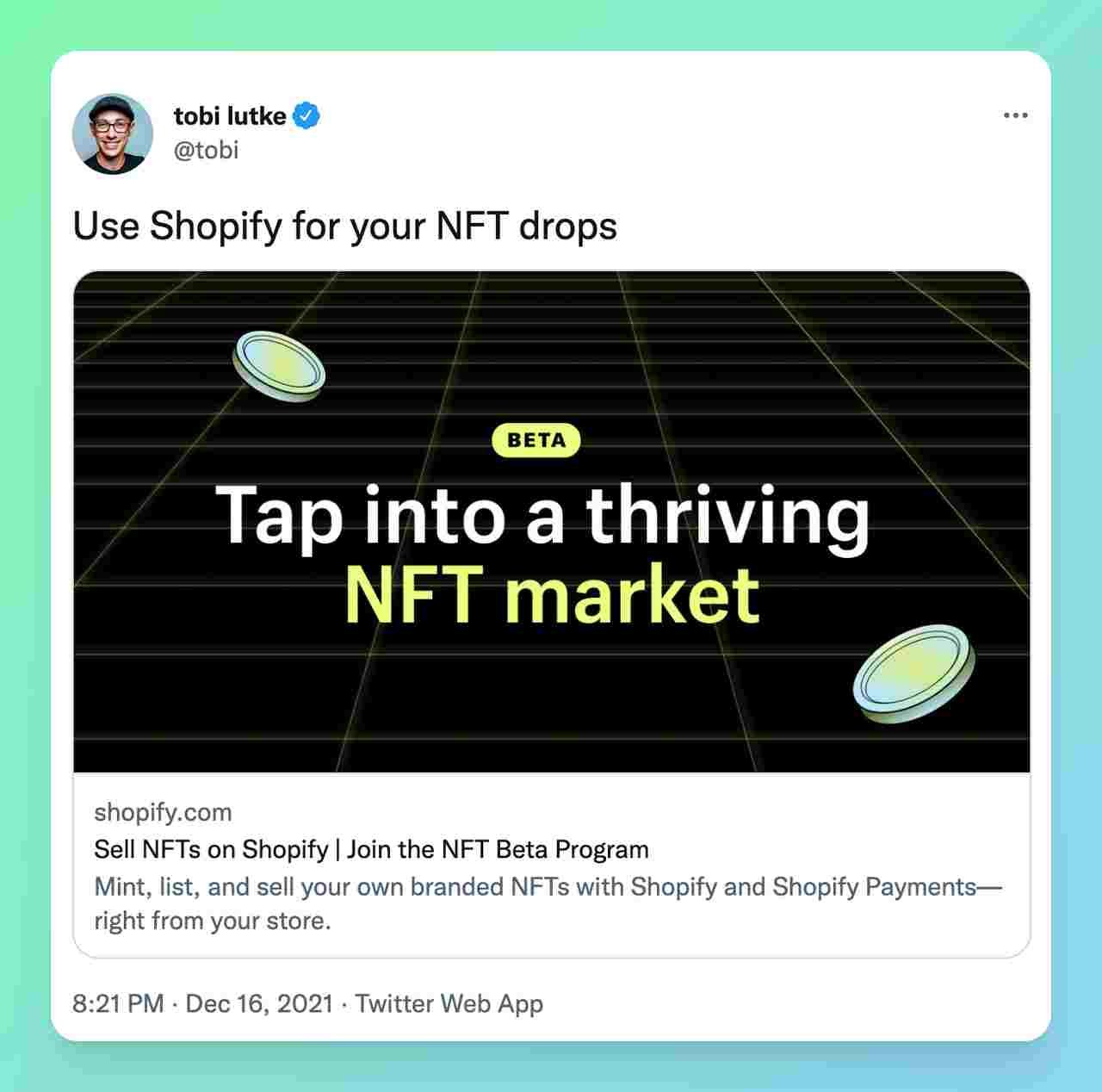 Shopify doubled its support for NFTs by allowing users to mint and trade non-fungible tokens by launching an NFT platform.

In order to accomplish this, the company teamed up with GigLabs, a company specializing in offering tools for working with NFTs.

In this way, Shopify users can purchase digital collectibles through multiple settlement methods, including Shopify, Shop Pay, cryptocurrency, or credit or debit cards.

“Moreover, customers can easily claim their NFTs via email and add them directly to their wallets.”

Shopify’s team clarified that clients could mint non-fungible tokens on various platforms, including Ethereum, Near, Polygon, and Flow, by teaming with its partner applications.

You can also read more about Shopify in these blog posts. 👀👇🏻