Anyone who has attempted to build a website even for once must have heard of WordPress. It’s free, open-source (and free 👀)…

The software achieved a significant number of milestones since its first release in 2003. Imagine how WordPress stats evolved over time along with the tool.

Moreover, it isn’t just a regular milestone. As of today, the number of WordPress sites in the world is over 455 million; meaning 42.7% of all websites are built with it.

It's a giant in the market, right? Wait until you see the fantastic WordPress statistics that’ll spark your interest. 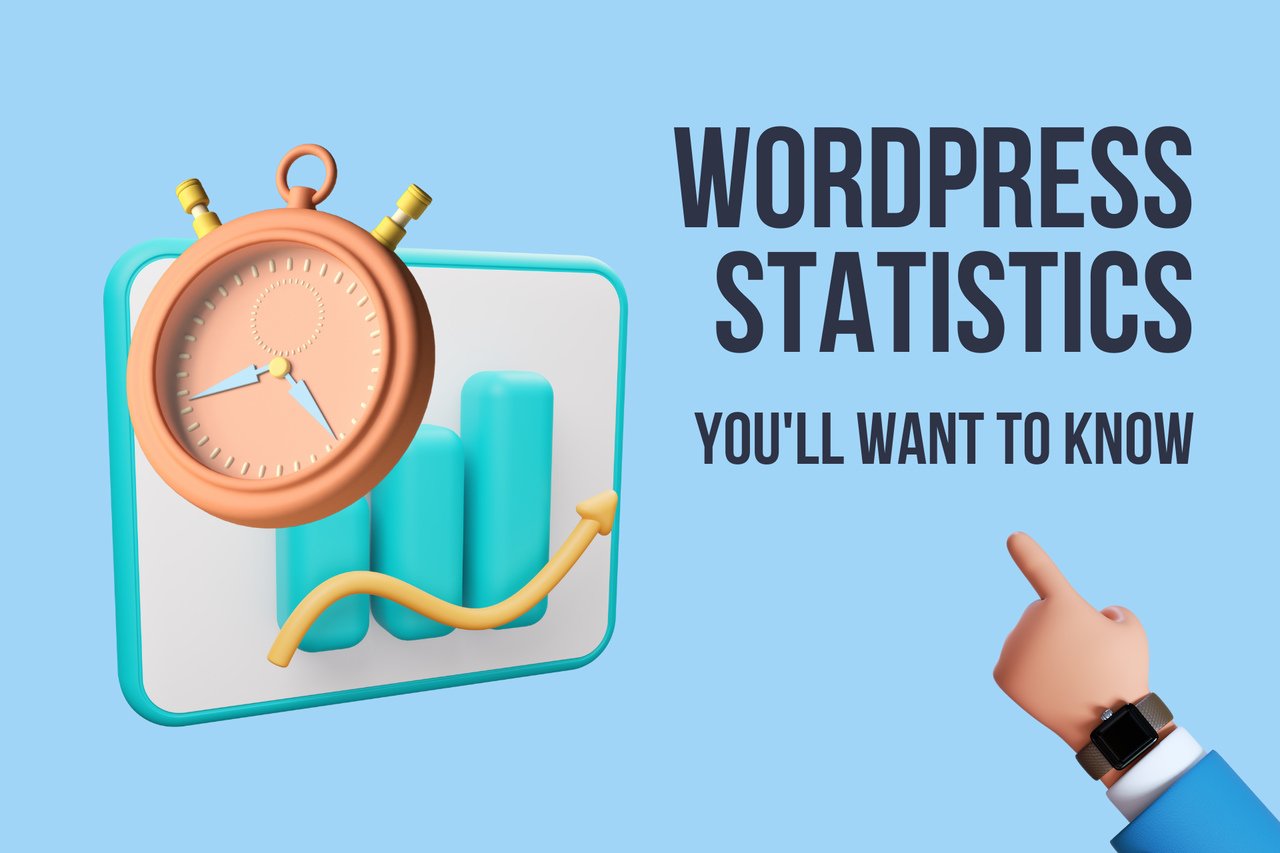 ➤ Currently, there are over 455 million WordPress websites across the globe. (Source: Techjury)

➤ It was Christine Selleck Tremoulet, a friend of Matt Mullenweg (co-founder of WordPress) who suggested the name “WordPress.”

➤ According to CodeinWP, WordPress has 64.3% of global CMS market share.

➤ WordPress isn’t owned by any company and doesn’t have a CEO.

➤ The WordPress project is run by volunteer developers all around the world.

➤ WordPress has been translated to 208 languages.

➤ Currently, there are over 455 million WordPress websites across the globe. (Source: Techjury)

➤ WordPress is the world’s most popular content management system. The percentage of websites using WordPress accounts for 42.7% of all websites on the internet. (Source: w3Techs)

According to Ahrefs, the keyword “WordPress” is globally searched 2.3M times every month.

➤ The reports from WordPress.com show that over 409 million people read more than 20 billion pages each month.

➤ Hosting blogs written in over 120 languages, WordPress.com, English is the top-used language with 71%. Spanish follows it with 4.7%. (Source: Wordpress.com)

➤ According to Kinsta’s report, WordPress holds a 40% market share of all the websites on the internet. 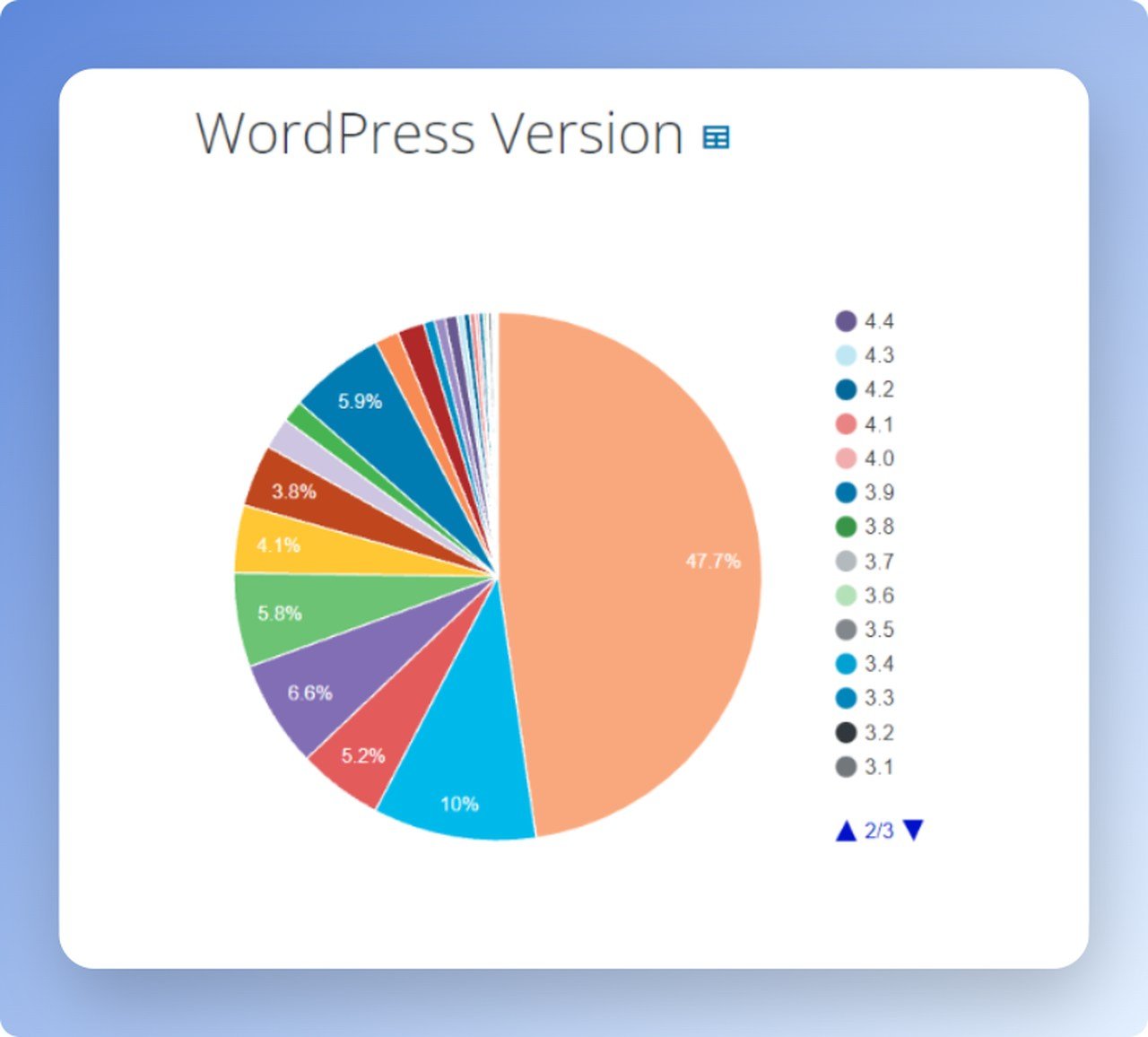 ➤ There have been 43 major versions of WordPress released since the platform’s inception.

➤ According to the WordPress.org download counter, Version 5.8 has been downloaded over 50 million times and the number is increasing every second as you read this report.

Here’s also a pie chart showing the usage percentages across the PHP versions of WordPress: 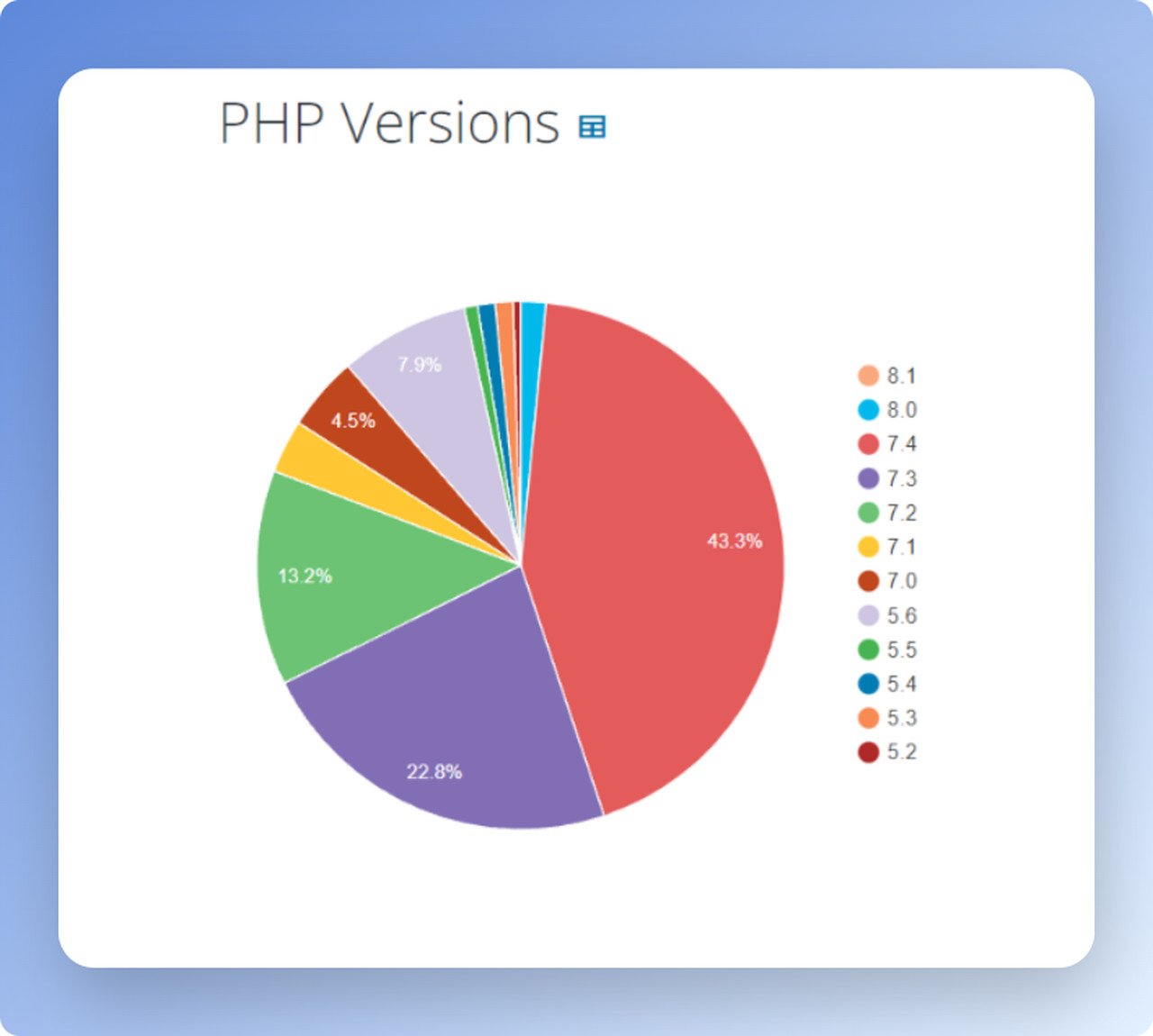 ➤ Statistics from Wordpress.org show that roughly 4.7% of WordPress users go with version 5.8 while 10% of WordPress sites use Version 5.7.

➤ The official roadmap from WordPress.org gives the date for a new version, 5.9, as of December 2021.

➤ Currently, the most installed WordPress plugin is the Classic Editor with over 5 million active installations.

➤ The second most downloaded WordPress.org plugin is the Elementor Website Builder with more than 5 million active installations.

➤ 47% of WordPress plugins have a donate button to support developers of the plugins. ➤ According to Manage WP, with over 44 thousand different plugins over 1,253,649,315 total plugin downloads happened on WordPress.org so far.

➤ Of all WordPress plugins, 57% have never been rated (with no reviews.)

The most popular and best WordPress plugins include:

➤ YOAST SEO: It’s the most used WordPress SEO plugin with over 5 million active installations and 27,406 reviews and ratings.

➤ Akismet: It’s a plugin that checks comments and contact form submissions against spam.

➤ There are 8,874 free themes on the WordPress themes directory.

Most WordPress themes are powered by WYSIWYG editors (what you see is what you get), enabling users to see the changes as they make them. Shane Melaugh and Paul McCarthy were the ones to introduce and create this functionality for WordPress. 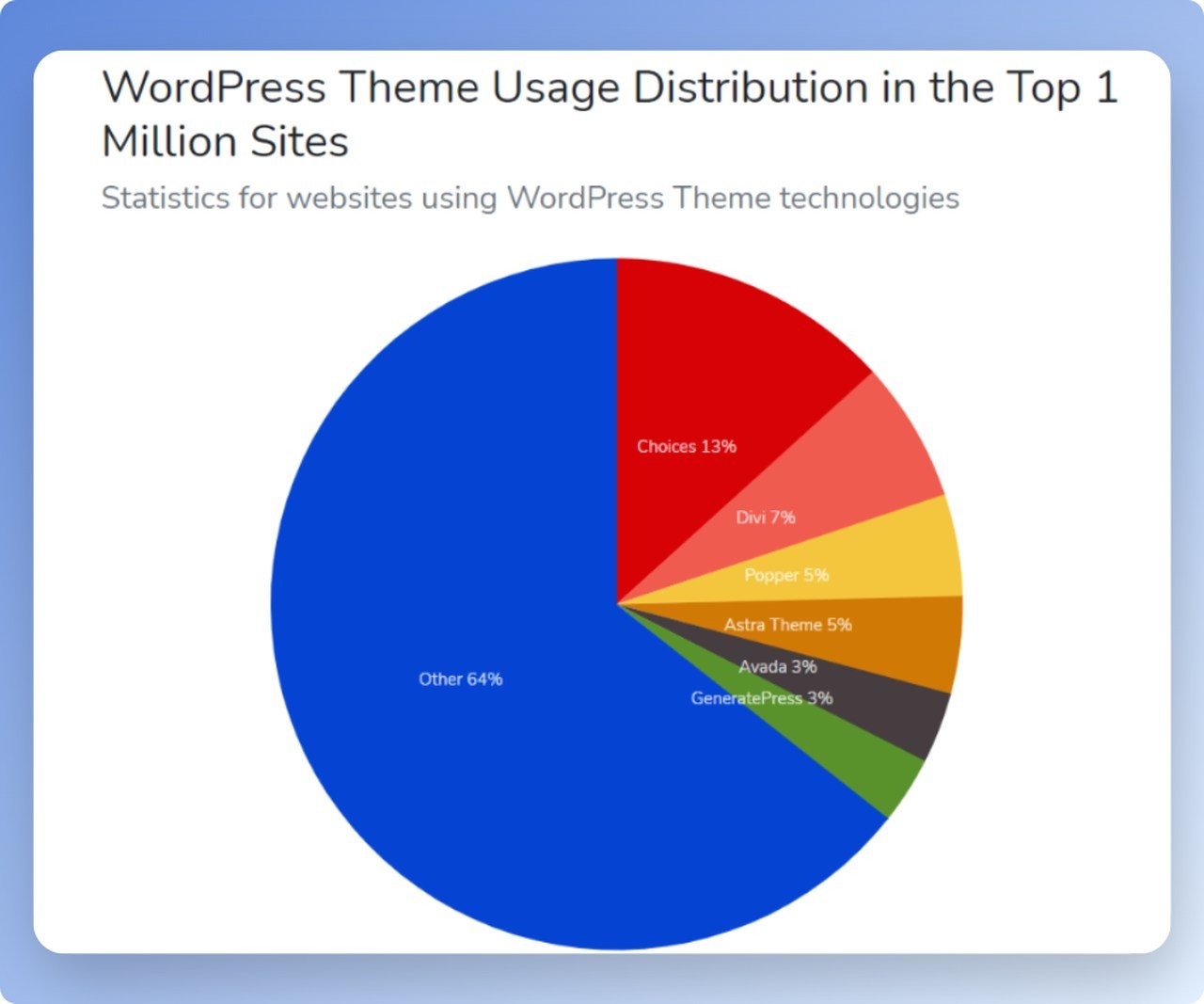 ➤ According to Builtwith, the most used WordPress theme is Choices with 34,443 websites, which accounts for 3.4%. 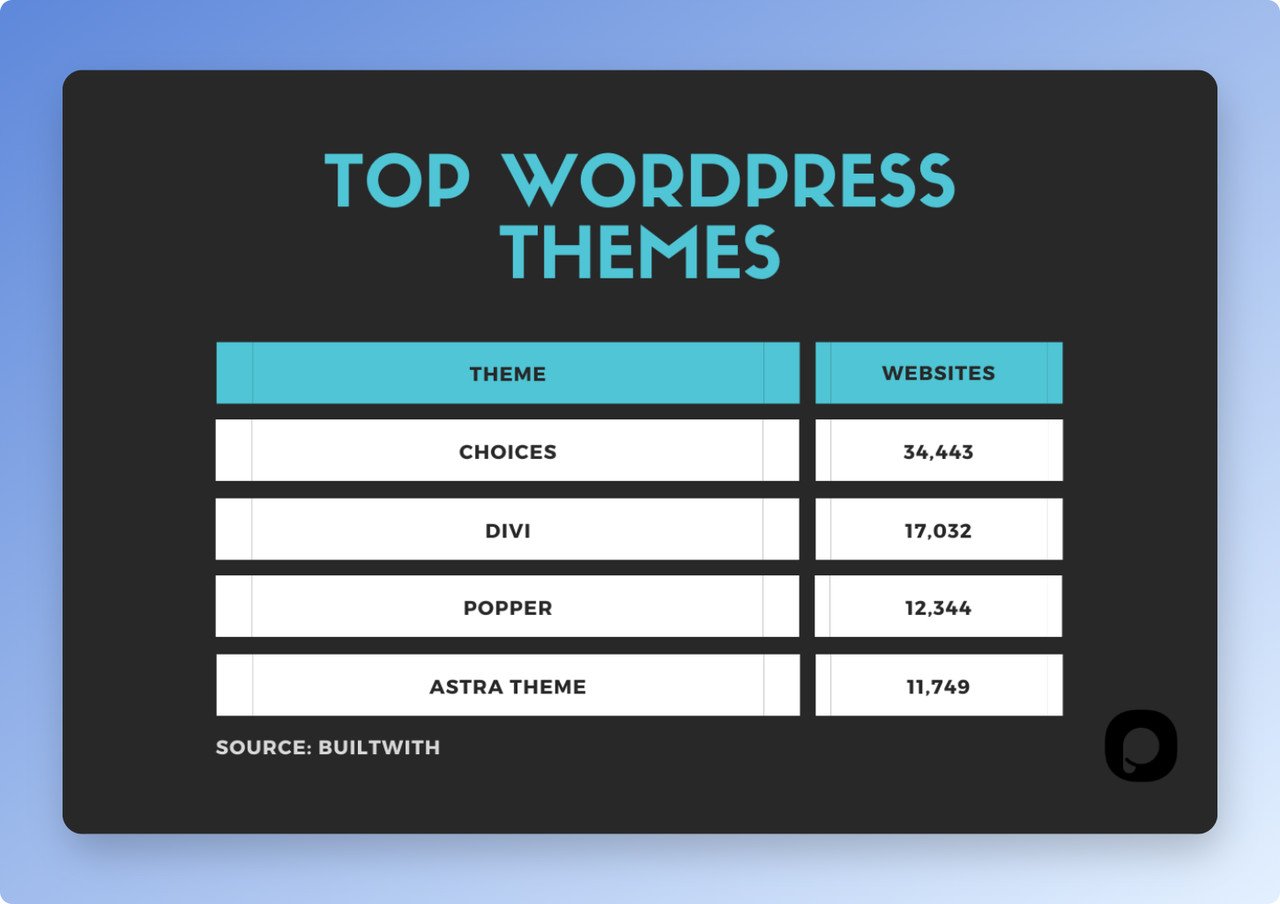 ➤ The second most popular WordPress theme is Divi with 17,032 websites using it.

➤ The Popper and Astra Themes follow the top two themes as third and fourth respectively.

➤ The most popular premium WordPress theme marketplace is ThemeForest which has over 51,000 premium themes and templates, over 15,000 of which are for WordPress.

➤ The official WooCommerce plugin was installed 140,115,510 times from WordPress.org and the number’s increasing every second. (Source: MakeWebBetter)

There are more than 4,414,537 live websites that are actively using WooCommerce.

➤ 28.19% of all online stores are powered by WooCommerce.

➤ 22% of the top 1 million e-commerce websites operate with WooCommerce.

➤ There are more than 6,000 WooCommerce plugins on WordPress.org alone. (Source: PluginRepublic)

➤ According to Crunchbase, the company that owns WooCommerce, that is Automattic.inc (that also owns WordPress.com) has raised over $697M. 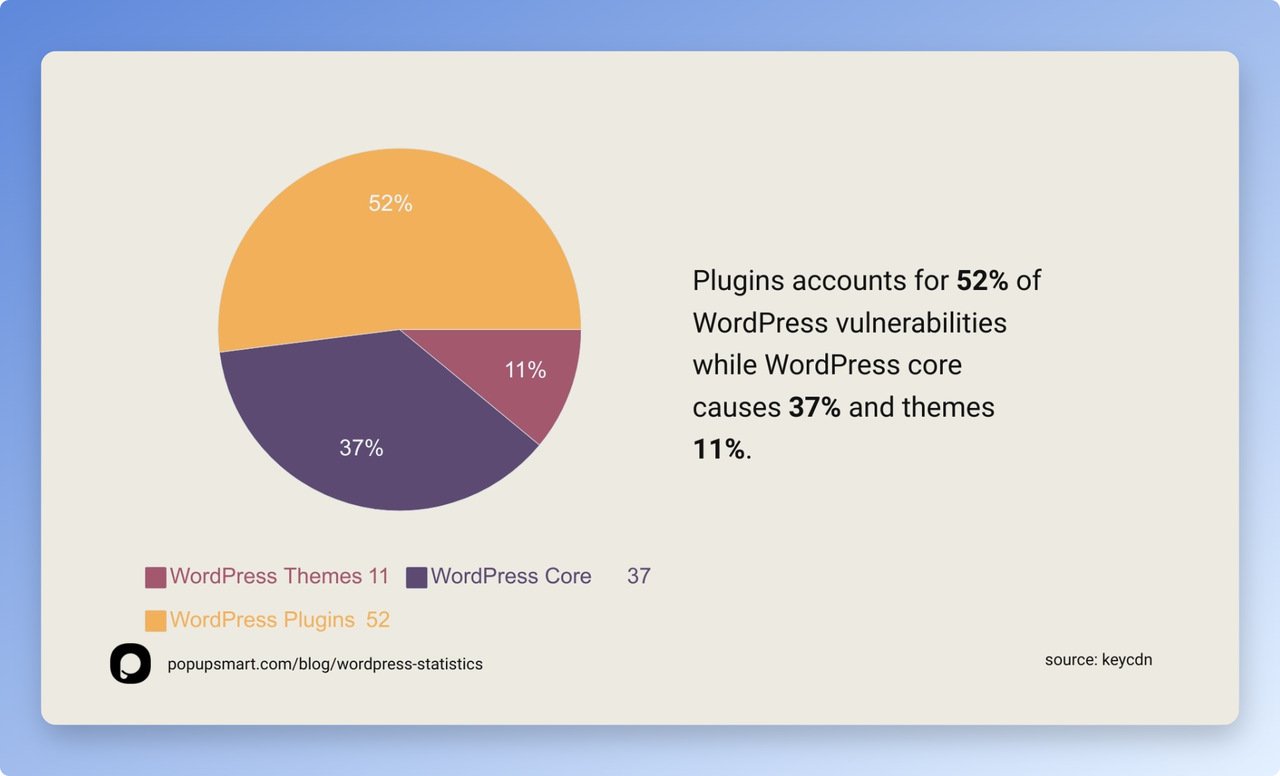 ➤ Based on the statistics from 40,000 WordPress websites in Alexa Top 1 million, over 70% of installations are vulnerable to hacker attacks and security breaches. (Source: WP WhiteSecurity)

41% of attacks on WordPress sites are caused by a vulnerability on the WordPress hosting platform. (Kinsta)

➤ 52% of reported vulnerabilities were caused by WordPress plugins while 44% of hacking was due to outdated WordPress sites.

➤ The English version of WordPress is the most popular one. While there are over 120 languages available on the platform, only 68% of them are actively used. (WP Beginner)

The monthly average of file uploads on WordPress.com is 24.7 million files. (WordPress)

➤ Non-English WordPress downloads outranked the English ones in 2018.

➤ WordPress sites receive visits from over 400 million people each month.

➤ According to Datanyze, roughly 705,175 e-commerce companies are using WooCommerce.

How Many WordPress Sites are There?

As of 2023, the number of websites using WordPress around the globe is 455 million. Considering that there are currently 1.4 billion total websites on the web, WordPress makes up for a very large portion of that amount.

How Many WordPress Plugins are There?

While the number increases as per day, currently there are over 59,208 free WordPress plugins available on The WordPress Plugins Directory.

How Many WordPress Themes are There?

WordPress has 8,874 free themes while there are over 11,000 WordPress themes on ThemeForest alone.

How Long Has WordPress Been Around?

WordPress has been around since its initial release on May 21, 2003 by its developers, Matt Mullenweg and Mike Little.

How Much of the Internet Uses WordPress?

WordPress powers more than 43% of all websites on the internet. (WP Beginner)

What Was WordPress Originally Created For?

WordPress was originally created for the development of an existing blogging software b2/cafelog which was discontinued by their main developers. The two users of b2/cafelog, Matt Mullenweg and Mike Little came up with the idea to build a new platform on top of b2/cafelog in 2003. (WP Beginner)

That’s all we can squeeze in this WordPress statistics article. Which stat amazed you the most? Tell us in the comments below!